I figured out why you were high.

I was invited to go along an a flight and when I got to the airport I found out that we were going to Monterey (KMRY). I had been there 20 years ago for a stop and taxi-back with another pilot but I didn’t remember anything about the airport.

As we approached the airport the pilot asked me what the traffic pattern altitude was and I looked it up in ForeFlight—1757 MSL. That seemed a bit high to me since, while I have never landed there, I have flown over it a bunch of times and I thought it was right on the ocean. We approached from the south and the airport was hidden by mountains. As the airport came into view, I thought that maybe the reason the TPA was so high was because the mountains on the south side were fairly high and that accounted for the high TPA. We were vectored up the coast for a right downwind to 28L. As we approached the runway on final we were really high. I attributed part of it to the odd sight picture. The surrounding terrain on the north side was at sea level and the airport is up on an island with a really long runway. I figured that he just got the sight picture wrong and called for a go-around. On the second try we were still hight but not too high to land.

When I got back I took a look at the charts and Chart Supplement and two things jumped out at me. Do you see the same things? 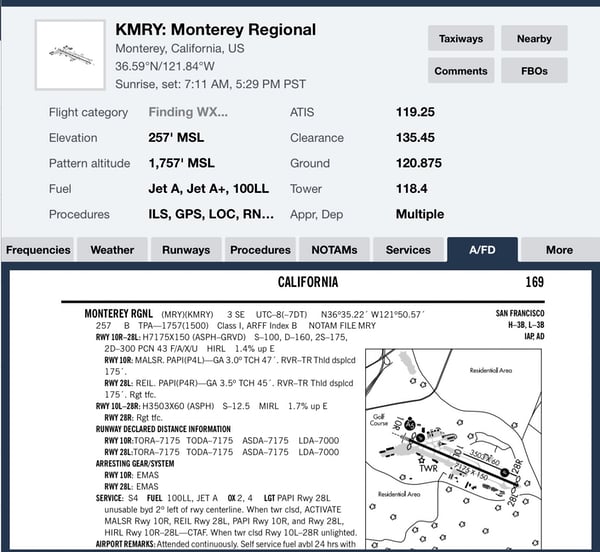 I have never been to an airport with a TPA that is 1500′ above the airport and neither had the pilot. So you need to drop another 500′ from what you are used to. The runway is the same width as what I am used to but it has an upslope of 1.4% which throws off your sight picture and it is longer than any runways I normally use which also throws off the sight picture.

Also notice that 28L and 28R both have right traffic, so the higher TPA isn’t explained by the higher terrain to the south—in fact the right pattern is probably to keep you out of the mountains.

This entry was posted on Saturday, February 2nd, 2019 at 7:23 pm and is filed under Airports. You can follow any responses to this entry through the RSS 2.0 feed. You can skip to the end and leave a response. Pinging is currently not allowed.