5−4−20. Approach and Landing Minimums
4. The missed approach point (MAP) varies depending upon the approach flown. For vertically guided approaches, the MAP is at the decision altitude/decision height. Non−vertically guided and circling procedures share the same MAP and the pilot determines this MAP by timing from the final approach fix, by a fix, a NAVAID, or a waypoint. Circling from a GLS, an ILS without a localizer line of minima or an RNAV (GPS) approach without an LNAV line of minima is prohibited.

5−4−21. Missed Approach
b. …when an early missed approach is executed, pilots should, unless otherwise cleared by ATC, fly the IAP as specified on the approach plate to the missed approach point at or above the MDA or DH before executing a turning maneuver.

AREA NAVIGATION (RNAV) APPROACH CONFIGURATION:
a. STANDARD T− An RNAV approach whose design allows direct flight to any one of three initial approach fixes (IAF) and eliminates the need for procedure turns. The standard design is to align the procedure on the extended centerline with the missed approach point (MAP) at the runway threshold, the final approach fix (FAF), and the initial approach/ intermediate fix (IAF/IF). The other two IAFs will be established perpendicular to the IF.

MDA—the lowest altitude, expressed in feet MSL, to which descent is authorized on final approach or during circle-to- land maneuvering in execution of a standard instrument approach procedure (SIAP) where no electronic glideslope is provided.

DA—a specified altitude in the precision approach at which a missed approach must be initiated if the required visual reference to continue the approach has not been established.

DH—with respect to the operation of aircraft, means the height at which a decision must be made during an ILS, MLS, or PAR IAP to either continue the approach or to execute a missed approach.

RNAV charts show a FO waypoint as a four-pointed star enclosed in a circle. This type of waypoint is used to denote a missed approach point, a missed approach holding point, or other specific points in space that must be flown over.

I can’t find any documentation of what the MAP looks like on AeroNav charts, however several reputable sources confirm that it is the vertical bar near the upsloping dotted lines and arrow that mark the missed approach procedure.

You can confirm this by looking at some charts with non-precision approaches. I picked KBUR because it is shown in some FAA publications as an example of missed approaches. 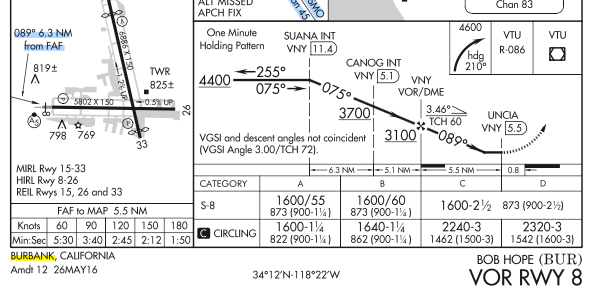 This entry was posted on Tuesday, February 28th, 2017 at 1:13 pm and is filed under Charts. You can follow any responses to this entry through the RSS 2.0 feed. You can skip to the end and leave a response. Pinging is currently not allowed.