Turbocharging and turbonormalizing allow an airplane to maintain sea-level power at higher altitudes. Both work on the same principle, exhaust gases turn a turbine that compresses the air that is fed into the engine. The compressed air contains more oxygen so more fuel can be burned resulting in more power. Turbonormalizing increases the air pressure to sea-level pressure. Turbocharging (also called turbosupercharging) can increase the air pressure to 6-10 inches above sea-level pressure. Otherwise they are the same. Turbocharging is especially useful when taking off at high density altitude and when climbing above mountains or weather.

Tornado Alley Turbo explain in detail how to operate their turbonormalized conversion in this article—Operation of the Turbonormalized (TN) IO-520/550 . They recommend lean of peak operation at full throttle using the mixture to control Turbine Inlet Temperature (TIT) and Cylinder Head Temperature (CHT).

This article in Plane and Pilot gives some examples of when a turbo can come in handy—Compress Your Power. This one by Mike Busch—Turbocharging and Pressurization: An Analysis of the Benefits, Costs, and Disadvantages—discusses the advantages and costs concludes that there is a tremendous benefit for serious travelers.

For those of you who like details, this article—Troubleshooting the Turbo-System by Mike Busch explains how the turbo system works and describes the operation of the system in different phases of flight. 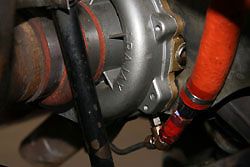 This is an image of a turbo on a TSIO-360. The housing contains the blades. The orange hose is for oil. 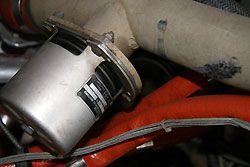 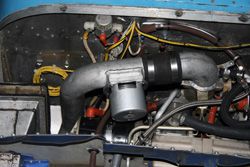 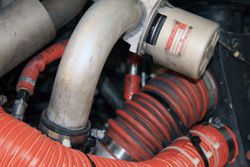 These are examples of the overboost control valve. It is located on the intake after the compressor outlet and before the carburetor or fuel injector. It prevents surges in pressure from reaching the engine. Overboost can be minimized by making sure the oil has reached operating temperature before takeoff. It can occur when the throttle is advanced quickly for a go-around and the prop governor lags or the wastegate sticks. 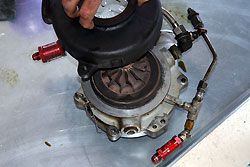 This is an image of a turbo on a TSIO-360. The housing is being removed showing the turbine blades. The orange/red parts on the end of the hoses are check valves for oil. Check valves are often installed into supply and drain lines of turbocharger oil systems to prevent oil from seeping by gravity (after shutdown) into the bearing housing to a level above the seals, causing oil to leak into exhaust and induction systems. Inlet check valves are, usually, the spring loaded ball-and-socket type. Pressures vary; refer to operator’s manual for proper procedure. Outlet check valves will, usually, have spring tensioned valves which will close in the abscence of flowing oil. Check outlet valve for spring tension. Replace if faulty. 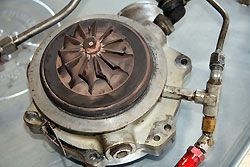 These blades turn at 50,000-100,000 rpm and are driven by the exhaust gas. At all inspections the blades must be checked for for potential foreign object damage (FOD). The outer tips and adjacent housing surfaces must be checked for any evidence of drag or rubbing. The blades on the turbine get very hot and are spinning very fast so there is a tendency for the blades to stretch over time. 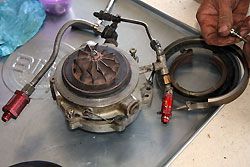 Another image of the turbo and associated hardware for attaching the housing. 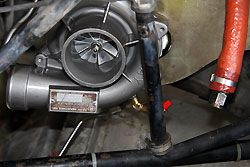 The impeller blades compress the intake air before it is sent to the engine. One of the checks that you perform at an annual or 100-hours inspection is to make sure they turn freely. In this case they did not, so the turbo was removed and inspected. It would not turn freely and was sent out for refurbishment. 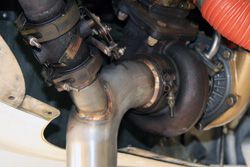 This is a wastegate. Exhaust gases bypass the turbine and go directly out the exhaust. The configuration is different for different aircraft and engines.

This entry was posted on Thursday, May 29th, 2008 at 12:01 pm and is filed under Engines. You can follow any responses to this entry through the RSS 2.0 feed. You can skip to the end and leave a response. Pinging is currently not allowed.