a. STANDARD T− An RNAV approach whose design allows direct flight to any one of three initial approach fixes (IAF) and eliminates the need for procedure turns. The standard design is to align the procedure on the extended centerline with the missed approach point (MAP) at the runway threshold, the final approach fix (FAF), and the initial approach/ intermediate fix (IAF/IF). The other two IAFs will be established perpendicular to the IF.

b. MODIFIED T− An RNAV approach design for single or multiple runways where terrain or operational constraints do not allow for the standard T. The “T” may be modified by increasing or decreasing the angle from the corner IAF(s) to the IF or by eliminating one or both corner IAFs.

c. STANDARD I− An RNAV approach design for a single runway with both corner IAFs eliminated. Course reversal or radar vectoring may be required at busy terminals with multiple runways.

d. TERMINAL ARRIVAL AREA (TAA)− The TAA is controlled airspace established in conjunction with the Standard or Modified T and I RNAV approach configurations. In the standard TAA, there are three areas: straight-in, left base, and right base. The arc boundaries of the three areas of the TAA are published portions of the approach and allow aircraft to transition from the en route structure direct to the nearest IAF. TAAs will also eliminate or reduce feeder routes, departure extensions, and procedure turns or course reversal.

1. STRAIGHT-IN AREA− A 30NM arc centered on the IF bounded by a straight line extending through the IF perpendicular to the intermediate course.

2. LEFT BASE AREA− A 30NM arc centered on the right corner IAF. The area shares a boundary with the straight-in area except that it extends out for 30NM from the IAF and is bounded on the other side by a line extending from the IF through the FAF to the arc.

3. RIGHT BASE AREA−A 30NM arc centered on the left corner IAF. The area shares a boundary with the straight-in area except that it extends out for 30NM from the IAF and is bounded on the other side by a line extending from the IF through the FAF to the arc. 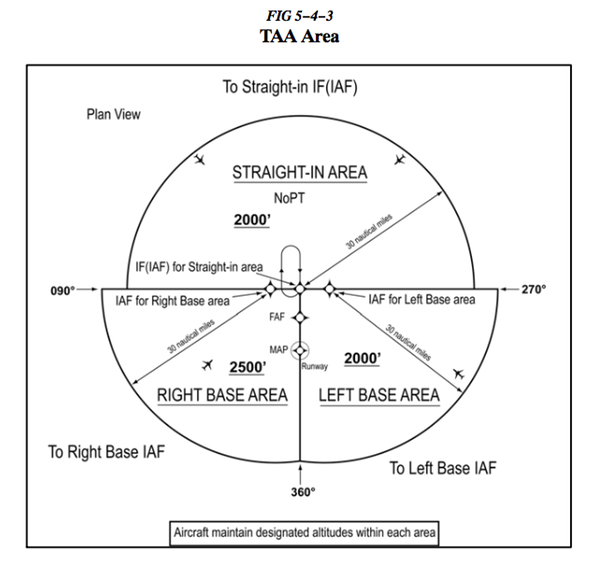 1. The TAA provides a transition from the en route structure to the terminal environment with little required pilot/air traffic control interface for aircraft equipped with Area Navigation (RNAV) systems. A TAA provides minimum altitudes with standard obstacle clearance when operating within the TAA boundaries. TAAs are primarily used on RNAV approaches but may be used on an ILS approach when RNAV is the sole means for navigation to the IF; however, they are not normally used in areas of heavy concentration of air traffic.

5 (b) Once cleared for the approach, pilots may descend in the TAA sector to the minimum altitude depicted within the defined area/subdivision, unless instructed otherwise by air traffic control.

6. U.S. Government charts depict TAAs using icons located in the plan view outside the depiction of the actual approach procedure. (See FIG 5−4−5). Use of icons is necessary to avoid obscuring any portion of the “T” procedure (altitudes, courses, minimum altitudes, etc.). The icon for each TAA area will be located and oriented on the plan view with respect to the direction of arrival to the approach procedure, and will show all TAA minimum altitudes and sector/radius subdivisions. The IAF for each area of the TAA is included on the icon where it appears on the approach to help the pilot orient the icon to the approach procedure. The IAF name and the distance of the TAA area boundary from the IAF are included on the outside arc of the TAA area icon. 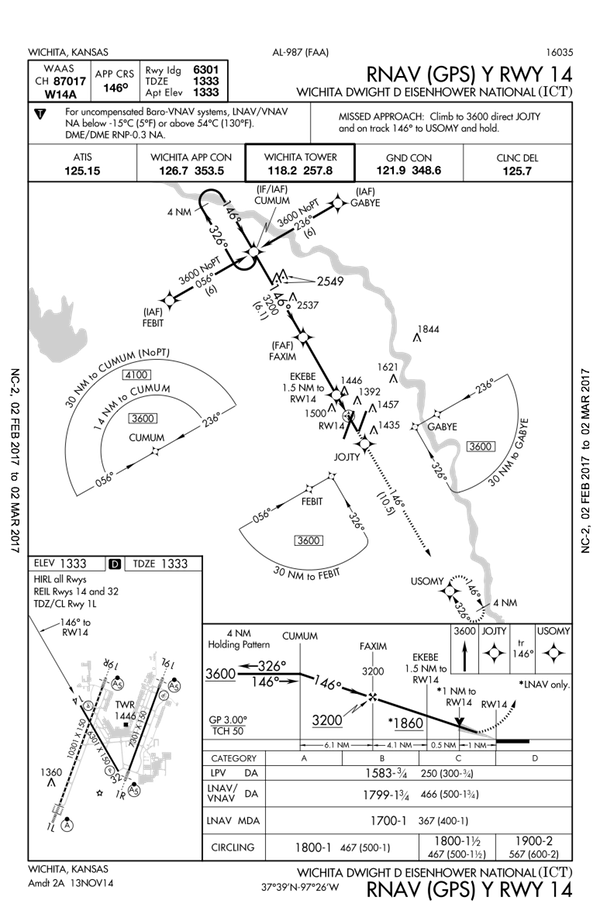 Note: Not all RNAV approaches have a TAA. If there is an MSA circle on the chart, there is no TAA.

BruceAir gives some examples of how ATC might clear you into a TAA and what altitude they expect you to fly.

This entry was posted on Thursday, February 23rd, 2017 at 1:49 pm and is filed under IFR. You can follow any responses to this entry through the RSS 2.0 feed. You can skip to the end and leave a response. Pinging is currently not allowed.