a. It is virtually impossible to provide regulations and procedures applicable to all possible situations associated with two-way radio communications failure. During two-way radio communications failure, when confronted by a situation not covered in the regulation, pilots are expected to exercise good judgment in whatever action they elect to take. Should the situation so dictate they should not be reluctant to use the emergency action contained in 14 CFR Section 91.3(b).

ForeFlight has an enhanced radar feature that you can turn on to show cloud cover. It doesn’t show the depth of the clouds or the tops, but you can use it to see where the nearest VFR conditions are. Along the central coast, it usually shows how far inland the fog is. In the summer in the midwest, it can show widespread cloud cover. This image shows that there is widespread IFR to the east with a pocket of VFR down the left side. Here’s a smaller version. 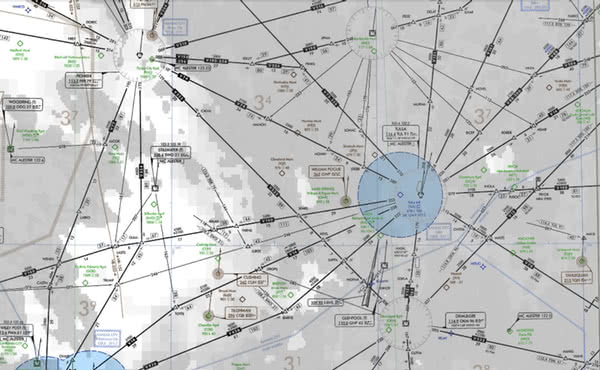 Suppose you have three hours to go on an IFR flight and you have crossed the Pioneer VOR and are approaching the MANON intersection when you lose radio communication. What do you do? The standard response is that you would maintain the highest of the Minimum IFR Altitude, Expected Altitude, or Assigned Altitude and fly the Assigned, Vectored, Expected or Filed route. But is that the best thing to do? I would say no.

First, unless you know exactly what caused the comms failure, you could be setting yourself up for a bad outcome. Maybe the alternator belt is broken and lying lose in the cowl, but maybe it is rubbing against the alternator and just about to catch fire. Or maybe you have a gear-driven alternator and the gears are being tossed around in the engine.

Second, how are you going to safely navigate the next three hours? If you still have nav functions, are they going to continue?

Third, how comfortable are you descending at your destination? What are the altitudes along the way?

Wouldn’t it make more sense to head west to VFR conditions? You can see from the chart that the Minimum IFR Sector Altitude is 3,400′. Climb to at least 4,000′ and head west or southwest to VFR conditions. Or turn around and go back where there were VFR conditions over Pioneer. That way you have less than a half hour in IFR. ATC should be able to track you, and if you go in a reasonable straight line, they will be able to keep other IFR traffic away from you. If you know the cloud tops, and have a capable aircraft, you might be able to climb to VFR on top and then you can do your own traffic avoidance.

This entry was posted on Friday, July 7th, 2017 at 2:08 pm and is filed under IFR. You can follow any responses to this entry through the RSS 2.0 feed. You can skip to the end and leave a response. Pinging is currently not allowed.