Is a TAF required at the alternate?

A recent post on Aviation StackExchange got me thinking about this. All of the Knowledge Test questions assume that a TAF will be available at the destination, but if you read the actual FAR that is not necessarily the case. You don’t need to have a TAF at the alternate and can use other sources of weather.

Keep in mind that there are two reasons that an alternate is required. First is to assure that the pilot has evaluated the weather at the destination and considered what to do if the destination is unavailable. Second is to let ATC know what the pilot intends to do if they lose communication. In the modern ATC system, with near universal radar coverage, that isn’t as much an issue as when the regulations were written.

In the US, the destination and alternates must comply with 91.169. It specifically says that there must be weather reports or weather forecasts for the airport. It doesn’t say anything about where the forecasts must come from. Normally when you flight plan you would rely on the Terminal Area Forecast to determine whether the weather one hour before and one hour after the estimated time of arrival at your destination is above the minimums. If that is not the case then an alternate is required. And again you would rely on the TAF for the forecast.

However, TAFs are not the only way to get a forecast. NOAA publishes Graphical Forecasts for Aviation and if the weather for the area is above minimums, you could use that as a means of satisfying the requirement.

Here is an example where the coastal forecast is below minimums but the airports inland will be VFR. 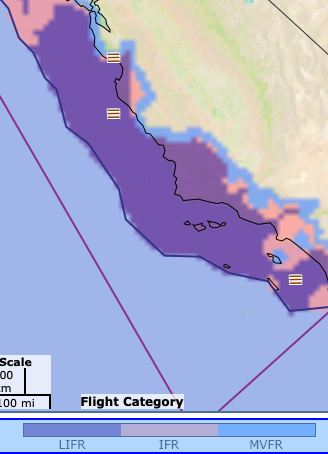 Or you could look at airports around the alternate and if they are above minimums, then your alternate would be as well. In the TAFs below, there are lots of airports that inland that do not have TAFs but that you can surmise that they will be VFR. 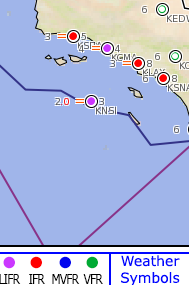 2) Appropriate weather reports or weather forecasts, or a combination of them, indicate the following:

(i) For aircraft other than helicopters. For at least 1 hour before and for 1 hour after the estimated time of arrival, the ceiling will be at least 2,000 feet above the airport elevation and the visibility will be at least 3 statute miles.

(i) For aircraft other than helicopters: The alternate airport minima specified in that procedure, or if none are specified the following standard approach minima:

(A) For a precision approach procedure. Ceiling 600 feet and visibility 2 statute miles.

(B) For a nonprecision approach procedure. Ceiling 800 feet and visibility 2 statute miles.

This entry was posted on Thursday, April 25th, 2019 at 7:37 am and is filed under IFR. You can follow any responses to this entry through the RSS 2.0 feed. You can skip to the end and leave a response. Pinging is currently not allowed.