The FAA still has questions on using an ADF (Automatic Direction Finder) to navigate an NDB (Non-Directional Beacon) approach. The questions aren’t too hard to answer, and in fact give you some practice adding and subtracting degrees, so they aren’t all bad. Non-directional radio beacons (NDBs) are simple AM radio transmitters that were first deployed in the 1920s and ’30s along major airmail routes. These land-based NDB stations broadcast a simple omni-directional navigational signal throughout the sky. At first they needed manual tuning but now you’re only likely to see variants of the Automatic Direction Finder. Thai Technics has examples of the various kinds of ADFs over the years. Lots of planes still have them installed, but few younger pilots are comfortable with them. However, there aren’t many NDB approaches left and most of them have a GPS overlay.

a. A low or medium frequency radio beacon transmits nondirectional signals whereby the pilot of an aircraft properly equipped can determine bearings and “home” on the station. These facilities normally operate in a frequency band of 190 to 535 kilohertz (kHz), according to ICAO Annex 10 the frequency range for NDBs is between 190 and 1750 kHz, and transmit a continuous carrier with either 400 or 1020 hertz (Hz) modulation. All radio beacons except the compass locators transmit a continuous three-letter identification in code except during voice transmissions.

b. When a radio beacon is used in conjunction with the Instrument Landing System markers, it is called a Compass Locator.

c. Voice transmissions are made on radio beacons unless the letter “W” (without voice) is included in the class designator (HW).

d. Radio beacons are subject to disturbances that may result in erroneous bearing information. Such disturbances result from such factors as lightning, precipitation static, etc. At night, radio beacons are vulnerable to interference from distant stations. Nearly all disturbances which affect the Automatic Direction Finder (ADF) bearing also affect the facility’s identification. Noisy identification usually occurs when the ADF needle is erratic. Voice, music or erroneous identification may be heard when a steady false bearing is being displayed. Since ADF receivers do not have a “flag” to warn the pilot when erroneous bearing information is being displayed, the pilot should continuously monitor the NDB’s identification.

This is what a typical rotating card ADF looks like, shown here above an older transponder. 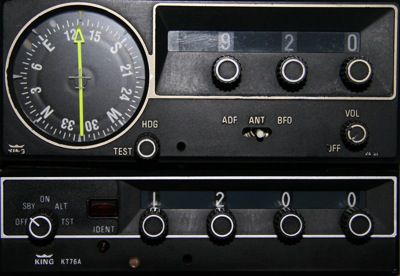 This ADF is tuned to a local AM radio station. Radio stations can be used to practice NDB approaches if you have an ADF but no local NDBs. As mentioned in the AIM, NDBs are subject to disturbances that affect the quality of the signal. This list is from Allstar Network. Stephen P. McGreevy has pictures of NDBs on his website. 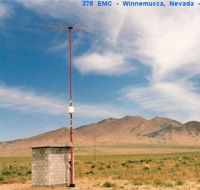 I’ve torn out lots of articles from magazined on how to fly NDB approaches, but it took a while to find discussions on the web. Here’s an article at AOPA. Here’s a good tutorial on flying an NDB approach to Vero Beach, FL. And Allstar Network has a good explanation as well.

To solve the problems on the practical test you just have to remember one formula.
Magnetic Heading + Relative Bearing = Magnetic Bearing TO the Station.
MH + RB = MB TO the Station

If you are asked for MB From the station, it is the reciprocal. 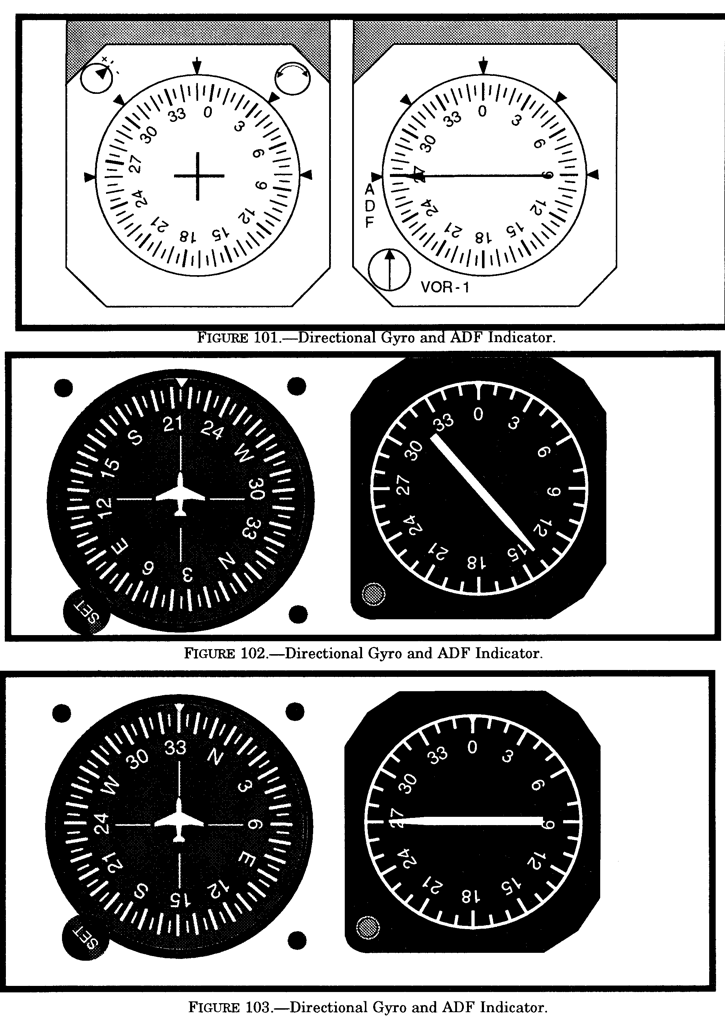 Question: (Refer to figure 101.) What is the magnetic bearing TO the station?

Question: (Refer to instruments in figure 102.) On the basis of this information, the magnetic bearing TO the station would be:

Question: (Refer to instruments in figure 103.) On the basis of this information, the magnetic bearing TO the station would be:

There are lots more in the same vein. Just be careful reading the indicators and with your subtraction.
They get a little trickier with a bunch that use the following image: 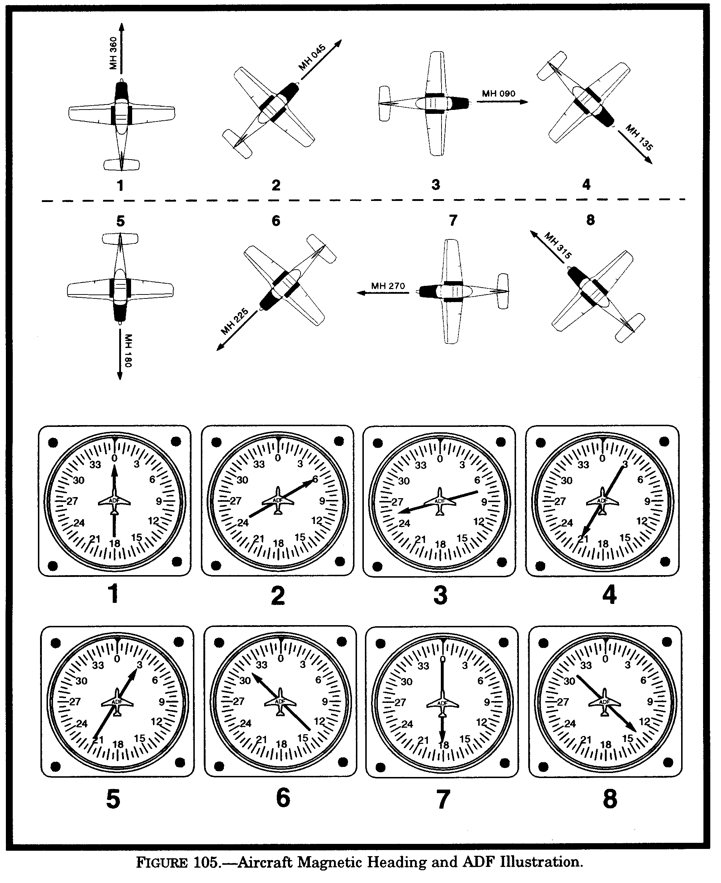 Question: (Refer to figure 105.) If the magnetic heading shown for aircraft 8 is maintained, which ADF illustration would indicate the aircraft is on the 090° magnetic bearing FROM the station?

Answer: A relative Bearing of 315° corresponds to ADF #6.

This entry was posted on Tuesday, March 18th, 2008 at 8:13 pm and is filed under Instruments. You can follow any responses to this entry through the RSS 2.0 feed. You can skip to the end and leave a response. Pinging is currently not allowed.