The winds along the Central Coast of California are sometimes strong, but usually onshore so runways are pretty much lined up with the wind. When they vary in direction it is usually because of thermal activity so they are fairly light. In the fall the Santa Ana’s can be very strong and from directions where we don’t normally get wind. Winds in the mountains can also be variable as well. My private-pilot-exam cross-country flight plan was to (Mojave) where there are some strong winds. When I did my flight planning the winds were 180° at 34 kts. Mojave has three runways, 12/30, 8/26 and 4/22. So the question was, which one to expect and could I land there.

First note that ATIS and ASOS give wind direction using magnetic north not true north. This differs from the METARs/TAFs and the Winds Aloft forecast which uses true north. Runway headings are also determined using magnetic north so the direction matches what you hear when you get the numbers. A good way to remember the difference is that, Text is True. Anything you read (METAR’s, TAF’s, FD’s, Wx Charts) is True. Anything your hear (ATIS, ASOS) is Magnetic.

The simplest way to calculate the crosswind component is to use the chart on the back of the E6B and shown below. 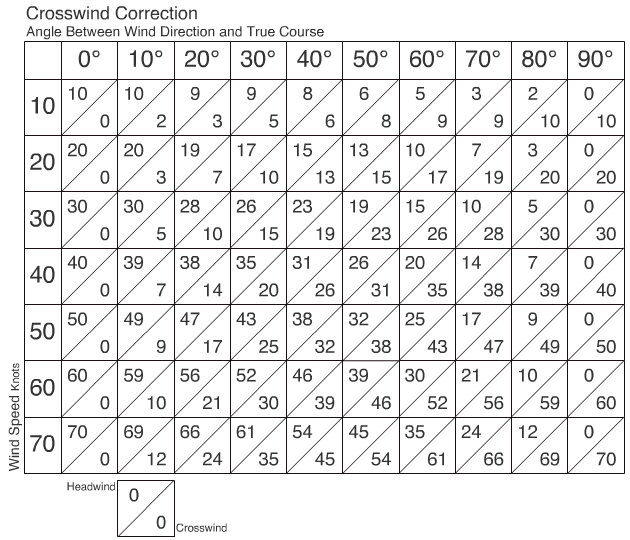 You can also find the crosswind and headwind components by using this chart from the AIM. (FIG 4−3−4) 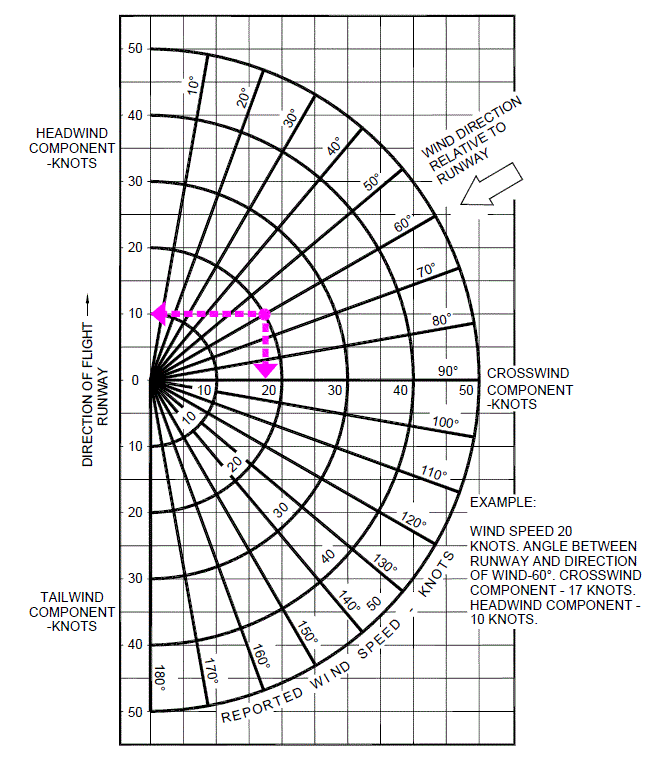 You can find the Maximum Demonstrated Crosswind Component (MDCC) in the POH if your aircraft was built after 1975. Most light aircraft have a MDCC of around 15-17 kts and that is what I use for the Cessna 182 I flew on the checkride. There are no runways that would work for landing. The examiner then asked, “What would you do if you had to land.” I’m not sure that I would have come up with this answer in the air, but taxiway E looks like it is at about 190°. The crosswind component would be less than 10 kts and it is plenty long. So, if I had an emergency or low fuel and had to land, I could ask the tower to land into the wind on Echo and do a short field landing.

Last week as part of my Flight Review we went to Paso Robles to practice crosswind landings. 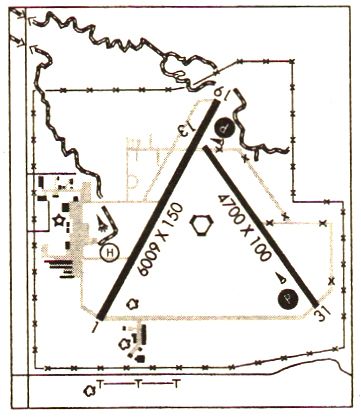 The ASOS indicated wind from 080 at 12 kts and I was flying a 1973 Cessna T210 that was made before MDCC numbers were put in the POH. The MDCC is probably 21 kts for this plane.

Either Rwy 1 or 13 would be good for landing. A Cherokee in front of us was using 13 so we opted to follow them in. When landing with a strong crosswind you need to continue flying the plane after it is on the runway and keep the aileron turned into the wind. We did a full stop landing so I could practice controlling the plane until it is off the runway. The main thing is to fly through the rollout keeping the ailerons turned into the wind until the wind has little capability to cause you problems. On the taxi back we noticed that the windsock was fully extended. We guessed that the wind had picked up and was at least 15 kts at 090°.

We decided to switch to Rwy 01 since it is the one most commonly used and the wind was almost directly off the right. These were challenging landings but after doing six marginal landings, the last two were fine and we called it a day.

1 Technically to find the angle between the Wind Direction and the True Course you subtract TC from WD using mod 360 arithmetic. If the wind is 090 and the runway is 31 then 090−310=−220. Since it is modulus 360 arithmetic, add 360 to -220 to get 140. Another way to think about it is that the wind is 90° to the right of North and the runway is 50° to the left of North. The angle between the two is 90 + 50 = 140°. This angle is more than 90° so it is a tailwind. You can use the chart to calculate corsswind and tailwind component by subtracting 90° from the angle. Use the chart just as you would with a positive difference but now the headwind component would actually be a tailwind component. The crosswind component would still be positive.

These calculations are fine for doing the written tests but rather difficult to do in the cockpit. Even the table lookup can be challenging on final. You can quickly and fairly accurately calculate the crosswind component using the clock method.

Compare this to the chart and it’s surprisingly close.

This entry was posted on Monday, December 3rd, 2007 at 5:32 pm and is filed under Weather. You can follow any responses to this entry through the RSS 2.0 feed. You can skip to the end and leave a response. Pinging is currently not allowed.