When reading about aircraft in publications like Aviation Consumer, I tend to focus on the accident causes and it seems that across all aircraft, around 12% of accidents are caused by fuel exhastion and another 2-4% by fuel contamination. This usually puts fuel mismanagement in third or fourth place among accident causes. Inexplicably, fuel exhaustion accounts for 22% of Cessna 210 accidents putting it in the number one position. On the low end, only 3% of the accidents in a Grumman Tiger are due to fuel exhaustion.

My general impressions are confirmed by the Nall Report—an annual safety report that presents an overview of the previous year’s general aviation accident statistics, including trends and contributing factors. It is published by the Aviation Safety Foundation (Link) Fuel Mismanagement has consistently been the cause of around 10% of pilot-caused accidents, though there was a slight downtrend in 2006.

The FARs are clear on the fuel requirements for VFR and IFR flight. 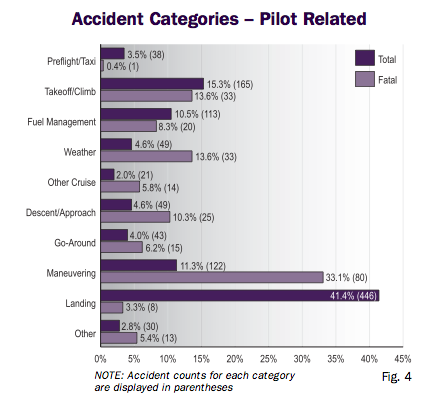 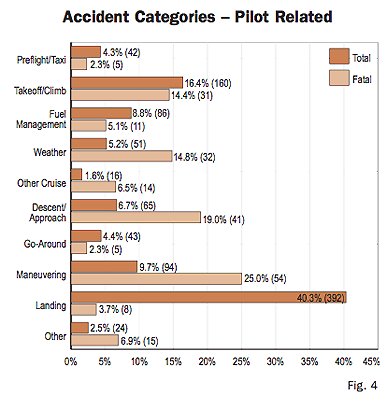 If you are in compliance with the FARs (Fuel for VFR and IFR Flight) you should have at least enough fuel to get to your destination and then some. Aircraft engines are pretty consistent in fuel burn at cruise so you should be able to figure out how much fuel you will burn per hour. It also shouldn’t be too difficult to figure out how long you’ve been in the air. Simple arithmetic should tell you if you have less than an hours worth of fuel left and need to get on the ground. One of the most infamous fuel exhaustion crashes is the Avianca Flight 52 crash in 1990. More recently the Brazilian football team crash appears to have been due to fuel exhaustion.

Aircraft fuel gauges have a well-deserved reputation for being unreliable and the FARs only require that fuel gauges read correctly when they are empty!

As shown above, the FARs require that fuel gauges must read zero when they are empty, but I suspect that most pilots do not know exactly what the gauges will look like on the plane they are flying when the tanks are empty. They can be calibrated by your A&P so that they do read empty, but the rest of the readings don’t necessarily mean anything. This Cessna is particularly bad at showing low levels. I can’t really see any difference between empty or 5 gals in each tank, though my A&P swears he can see a difference. If I owned this 182 I’d have the gauges calibrated to read exactly 0 when the tanks were empty. The Cherokee 140 is much better at showing zero fuel. If the RHS side of the needle is left of the zero mark, then you are out of fuel. 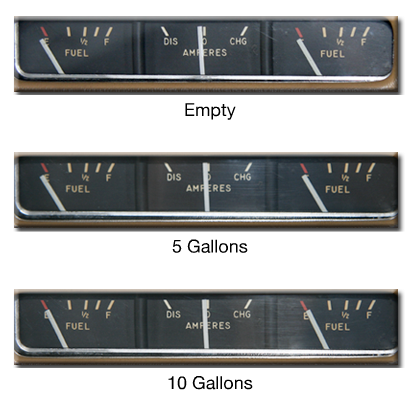 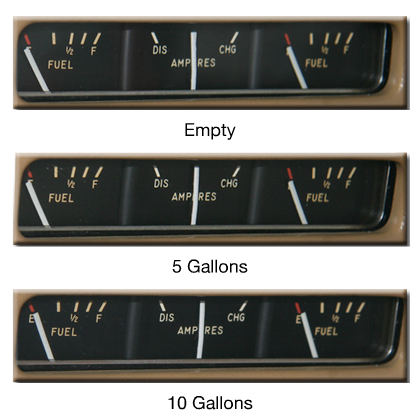 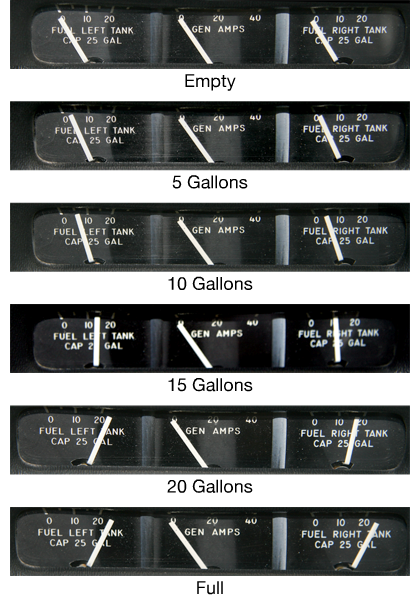 These pictures (the Cessna especially) highlight the fact that you should never rely on fuel gauges to indicate whether you have enough fuel to reach your destination. Fuel gauges should be used to warn you of unusual fuel situations—leaking fuel tanks, forgetting to put the fuel cap on, siphoning of fuel from the vent lines—but never for determining how much fuel remains.

Fuel starvation accidents occur when there is fuel in the tanks but it is not making it to the engine. This is usually due to pilots not understanding the fuel management system. Several high-profile accidents highlight the need to understand your fuel system. John Denver’s accident involved taking off without refueling and then losing control of the aircraft when switching tanks. The loss of control was most likely caused by the unfamiliarity of the pilot with the fuel selector and its location above the pilot’s left shoulder. A recent accident in a Cessna 150 underscores the fact that you need to understand the fuel system on the airplane you are flying. Most Cessna 150s have a fuel selector that is either on or off. This aircraft had been modified to have On/Off and Left/Right like many other Cessnas. The pilot did not, for some reason, notice this and had a fuel starvation accident when he had a tank on the right hand side of the plane that was full of fuel. Another example occurred in 2006 when a student pilot turned the fuel selector in a PA28 to OFF when performing a GUMPS check in the pattern. (Another reason Why I Dislike GUMPS.)

There are three contaminants often found in 100LL: water, jet fuel, and dirt. Water can get into fuel from condensation or from re-fueling, jet fuel from inattentive re-fueling, and dirt from the fuel.

David Board relates an unusual story where he thinks that water got into his fuel while flying through clouds and moisture, then froze that night when he landed. When he drained the sumps before takeoff, he didn’t find any water. When he descended to sea level, where the temperature was above freezing, the ice thawed and sank to the bottom of the fuel tank. The engine stalled on final, but he was able to make a safe landing.

If tanks are kept full when the aircraft is tied down, there is less air in the fuel tank, hence the potential for condensation is reduced.

I have only experienced one occurrence of water in the fuel—even though I have been tying down my Cherokee outside since 2008. I had gone to Catalina to help ferry kids back from an weeks vacation. I was a little early so I pre-flighted the Cessna 210 that had been tied down all week. There was about ½ inch of water in the fuel tester—probably from condensation.

It can happen to large aircraft as well. The Boeing 777 that landed short of London Heathrow Airport in 2008 most likely lost power to its engines because of ice in the fuel tanks.

At the moment, there are only two types of fuel available at most airports, 100LL and Jet A. Most fuelers know that small planes use 100LL so fueling with Jet A instead shouldn’t be a problem. Also, the Jet A nozzles are supposed to be too large to fit into planes that use 100LL. There are exceptions, as Mike Busch found out when his T310 was fueled with Jet A. It also happened to an PA31 flyer. These two pilots caught the fueler in the act but another pilot was not so lucky. A Cessna 421 crashed after being refueled with Jet A instead of 100LL.

Some large twins use Jet A (the Piper Cheyenne and Mitsubishi MU2 come to mind) so if I was flying a twin I’d make sure I watched the ground crew fuel the airplane. The same confusion can arise with large singles like the Pilatus, Malibu, and EADS Socata TBMs use Jet A while similar-sized aircraft like the Piper Mirage do not. There are not a lot of Diamonds running the Thielert diesels but as more GA aircraft start using Jet A, mis-fueling incidents will most likely abound.

There are at least two good ways to distinguish pure 100LL from kerosine-contaminated 100LL. One is by odor: Jet A has a very distinctive odor that is detectable even in small concentrations. The other (and probably best) is by using the paper-towel test: A few drops are placed on a paper towel (or a sheet of paper) and allowed to evaporate completely. Pure 100LL will not leave an oily ring on the towel, but even small amounts of Jet A contamination will leave an obvious ring. Also, Jet fuel is heavier than 100 LL so Jet A should come out first.

I’ve seen pilots drop dipsticks and chains into fuel tanks and I’ve gotten dirt out of sumps but I’m not aware of any accidents attributed to foreign objects/dirt in the fuel tanks—though I suspect there are some.

This entry was posted on Wednesday, September 10th, 2008 at 4:04 pm and is filed under Aircraft. You can follow any responses to this entry through the RSS 2.0 feed. You can skip to the end and leave a response. Pinging is currently not allowed.