High Altitude Area Navigation Routing
Special high altitude routes allow pilots routing options for flight within the initial high altitude routing (HAR) Phase I expansion airspace. Pilots are able to fly user-preferred routes, referred to as non-restrictive routing (NRR), between specific fixes described by pitch (entry into) and catch (exit out of) fixes in the HAR airspace. Pitch points indicate an end of departure procedures, preferred IFR routings, or other established routing programs where a flight can begin a segment of NRR. The catch point indicates where a flight ends a segment of NRR and joins published arrival procedures, preferred IFR routing, or other established routing programs.

Above FL 350 in fourteen of the western and soutern ARTCCs
Chart Supplement has pitch and catch points.

Published in the Chart Supplement for low and high stratum.

Tower En Route Control
An ATC program available to pilots that provides a service to aircraft proceeding to and from metropolitan areas.
Fly an IFR flight without leaving approach control airspace. 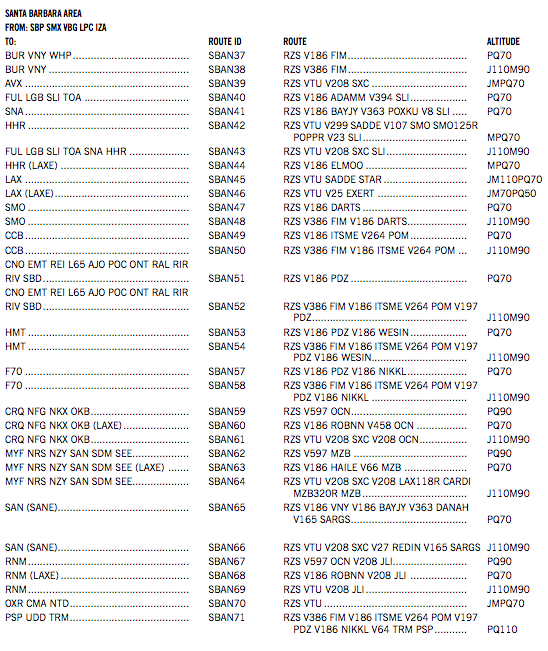 Primary and Secondary En Route Obstacle Clearance Areas
The primary obstacle clearance area has a protected width of 8 NM with 4 NM on each side of the centerline. The primary area has widths of route protection based upon system accuracy of a ±4.5° angle from the NAVAID. These 4.5° lines extend out from the NAVAID and intersect the boundaries of the primary area at a point approximately 51 NM from the NAVAID. Ideally, the 51 NM point is where pilots would change over from navigating away from the facility, to navigating toward the next facility, although this ideal is rarely achieved.

If the distance from the NAVAID to the change-over point (COP) is more than 51 NM, the outer boundary of the primary area extends beyond the 4 NM width.

Direct Route Flights
Direct route flights are flights that are not flown on the radials or courses of established airways or routes. Direct route flights must be defined by indicating the radio fixes over which the flight passes. Fixes selected to define the route should be those over which the position of the aircraft can be accurately determined. Such fixes automatically become compulsory reporting points for the flight, unless advised otherwise by ATC.

Published RNAV Routes
Published RNAV routes are fixed, permanent routes that can be flight planned and flown by aircraft with RNAV capability.

OROCA – Off-Route Obstruction Clearance Altitude
An OROCA is an off-route altitude that provides obstruction clearance with a 1,000 foot buffer in non-mountainous terrain areas and a 2,000 foot buffer in designated mountainous areas within the United States. This altitude may not provide signal coverage from ground-based NAVAIDs, ATC radar, or communications coverage.

OROCAs depicted on en route charts do not provide the pilot with an acceptable altitude for terrain and obstruction clearance for the purposes of off-route, random RNAV direct flights in either controlled or uncontrolled airspace.

When you plan a random RNAV route, I would suggest you don’t restrict yourself to just the IFR enroute charts. I also look at sectional charts. They also depict a Maximum Elevation Figure (MEF) which may be used for altitude planning, but its dimensions are 30 minutes of latitude and longitude whereas the OROCA altitude covers an area of 1 degree of latitude and longitude, so there are 4 times the detail. If you use the MEF, remember that you have to add 1000 feet or 2000 feet (mountainous) to get to an equivalent to the OROCA, as the MEF only has a buffer of at most a few hundred feet and it depicts the MSL altitude of the obstacle or terrain. John D. Collins

Computer Navigation Performance
A point used for the purpose of defining the navigation track for an airborne computer system (i.e., GPS or FMS) is called a Computer Navigation Fix (CNF). CNFs include unnamed DME fixes, beginning and ending points of DME arcs, and sensor final approach fixes (FAFs) on some GPS overlay approaches.

A CNF name is enclosed in parenthesis, e.g., (MABEE) and is placed next to the CNF it defines. They are being replaced with fixes that start with CF.

Minimum Reception Altitude (MRA)
The minimum altitude the navigation signal can be received for the route and for off-course NAVAID facilities that determine a fix. [Fixes on the chart have a flag with an R in it.]

Maximum Authorized Altitude (MAA)
An MAA is a published altitude representing the maximum usable altitude or flight level for an airspace structure or route segment. [Not very common. Used in high density areas like New York to keep traffic below arrivals and departures. e.g MAA-10000 on V213 between ARD and TEB.]

Minimum Obstruction Clearance Altitude (MOCA)
The MOCA is the lowest published altitude in effect between fixes on VOR airways, off-airway routes, or route segments that meets obstacle clearance requirements for the entire route segment. This altitude also assures acceptable navigational signal coverage only within 22 NM of a VOR. [Indicated on the chart with an asterisk preceeding the altitude e.g. *5800 between PMD VOR and VICKY waypoint.]

Reduced Vertical Separation Minimums (RSVM)
RVSM is a term used to describe the reduction of the standard vertical separation required between aircraft flying at levels between FL 290 (29,000 feet) and FL 410 (41,000 feet) from 2,000 feet to 1,000 feet.

Cruise Clearance
The term “cruise” may be used instead of “maintain” to assign a block of airspace to an aircraft. The block extends from the minimum IFR altitude up to and including the altitude that is specified in the cruise clearance.

Position Report Items
Position reports should include the following items:
1. Aircraft identification
2. Position
3. Time
4. Altitude or flight level (include actual altitude or flight level when operating on a clearance specifying VFR-on-top)
5. Type of flight plan (not required in IFR position reports made directly to ARTCCs or approach control)
6. ETA and name of next reporting point
7. The name only of the next succeeding reporting point along the route of flight
8. Pertinent remarks

Additional Reports
The following reports should be made at all times to ATC or FSS facilities without a specific ATC request:

Route
If pilots must continue their flight under IFR after experiencing two-way radio communication failure, they should fly one of the following routes:
• The route assigned by ATC in the last clearance received.
• If being radar vectored, the direct route from the point of radio failure to the fix, route, or airway specified in the radar vector clearance.
• In the absence of an assigned route, the route ATC has advised to expect in a further clearance.
• In the absence of an assigned or expected route, the route led in the flight plan.

Climbing and Descending En Route
When ATC issues a clearance or instruction, pilots are expected to execute its provisions upon receipt. In some cases, ATC includes words that modify their expectation. For example, the word “immediately” in a clearance or instruction is used to impress urgency to avoid an imminent situation, and expeditious compliance is expected and necessary for safety.

Once you vacate an altitude, you may not return to that altitude.

Climb at an optimum rate consistent with the operating characteristics of the aircraft to 1,000 feet below the assigned altitude, and then attempt to climb at a rate of between 500 and 1,500 fpm until the assigned altitude is reached. If at any time the pilot is unable to climb at a rate of at least 500 fpm, advise ATC. If it is necessary to level off at an intermediate altitude during climb, advise ATC.

Controllers anticipate and plan that the pilot may level off at 10,000 feet MSL on descent to comply with the 14 CFR Part 91 indicated airspeed limit of 250 knots.

The holding instructions include the direction from the fix, name of the fix, course, leg length, if appropriate, direction of turns (if left turns are required), and the EFC time.

This entry was posted on Monday, March 6th, 2017 at 2:08 pm and is filed under IFR. You can follow any responses to this entry through the RSS 2.0 feed. You can skip to the end and leave a response. Pinging is currently not allowed.